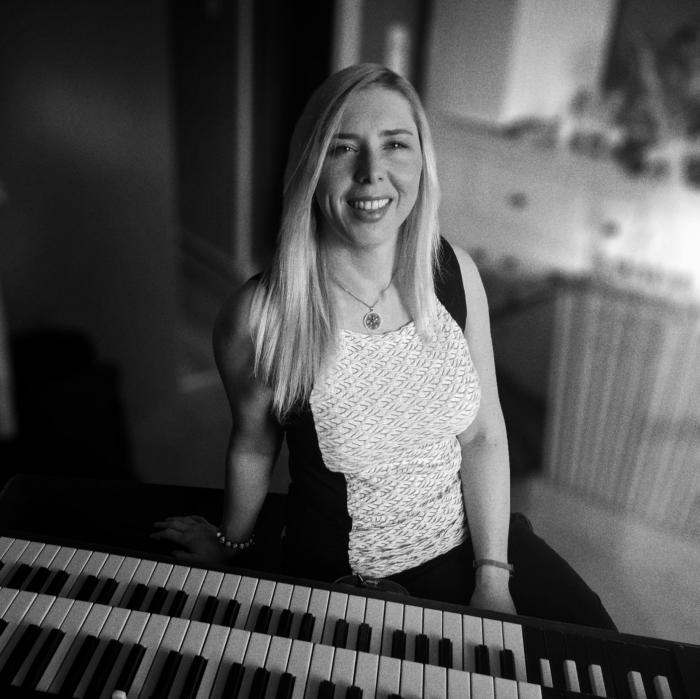 Jazz organist and vocalist Adrienne McKay is a truly unique talent on today’s music scene. With today’s musicians learning jazz in the classroom, it has become an exception rather than the rule for a musician develop and learn “on the road”, playing clubs, festivals and touring.

Born and raised in Nelson, New Zealand Adrienne was born into a musical family. Some of her earliest influences started when she was just four, listening to her dad as he practiced and performed on the organ. After discovering Oscar Peterson at the age of 13 Adrienne knew she was destined and determined to be a great jazz musician. Adrienne acquired her first organ in 2003 when she imported a Hammond C3 from Canada and with very few jazz organ players in her country, she taught herself to play by listening to recordings by Jimmy Smith, Joey DeFrancesco, Groove Holmes and Jack McDuff. Adrienne graduated Massey Conservatorium of Music in Wellington with a degree in jazz voice in 2004. She spent the next four years performing throughout New Zealand and Australia in clubs and festivals in the swing band The Vipers.

Adrienne relocated to the USA in 2008. During that year spent in the Midwest, performing at Hammond organ summits, jazz clubs and jam sessions in Cincinnati, Detroit, Dayton and Columbus, Adrienne further developed her sound on the bandstand.Now based in New York, Adrienne actively performs throughout the city including a weekly residency at Marcus Samuelsson’s iconic Red Rooster in Harlem.

In April of 2016 Adrienne self-released her first instrumental album ‘Mo’ Puddin’. The record quickly made it’s way up to the number 4 position in the CMJ Jazz Charts, USA. Recorded in NYC with master musicians Peter Bernstein and Willie Jones III this album is an original spin on the rich tradition of the B3, guitar, drums trio. The tracks on Mo’ Puddin’ have been carefully crafted and feature three B3 classic covers and six of her original compositions, each with their own flavor, audacity and infectious groove.

After discovering Oscar Peterson at the age of 13 Adrienne knew she was destined and determined to be a great jazz musician.

Adrienne followed up her instrumental release with another impressive recording ‘Blues Jam.’ What sets Blues Jam apart from other albums is the unique combination of a female led organ/vocal trio. Blues Jam is a showcase of Adrienne’s captivating vocals combined with the propulsive energy of an organ trio. The blend of Marvin Horne’s virtuosity on guitar and Brian Floody’s dynamic drumming, locking in with Adrienne’s left hand bass and innovative bluesy soling has come together to create refreshing new versions of songs in the spirit of BB King, Ray Charles and Billie Holiday.

Adrienne has albums released on HMV in Japan, EQ music in Singapore, Ode Records in New Zealand and three self released albums in the USA.

Learn the joy of music with Adrienne McKay.

Guitar.
Learn how to read music, pick and play finger style techniques.  I can teach you to strum your favorite songs and play along with recordings or accompany yourself singing.

Ukulele.
The Ukulele is such a fun instrument and great to learn especially for younger children that have small hands and might not be ready for the size of the guitar yet.  Learn how to strum along with popular songs.

Piano.
The piano is a great instrument to learn to get a solid foundation in music.  I teach from ages 4 and up from and from beginner to advanced levels. Learn to read music, the notes on the piano and start to play your favorite songs.